Mother Nature is undoubtedly a constant source of mesmerising things and its breathtaking beauties never cease to amaze. Such an astonishing sight had recently occurred in Florida, where a habitant initially thought he was dreaming when seeing an orchid in his backyard invaded by some unreal flying insects.

Totally surprised, the man captured the incredible sight on camera, without knowing from where these magical creature came from. Even if they look completely out of this world, the mysterious insects are actually real and they’re called green orchid bees – as he later found out. But since these emerald green bees are native to Central America – especially in the rainforests, it was quite a sight to be spotted in Florida.

As their name suggests, these magical bees are absolutely in love with orchids. However, the males are the ones that fly from one orchid to another, to cover their legs with the flower’s irresistible perfume. But they’re doing it with a very clear reason as the tempting scent attracts females.

The green orchid bees are about the size of the common bees(honeybee), but unlikely them, these are less harmful. In fact, only the females have a sting, while the males are completely harmless.

The tribe Euglossini are a group of about 200 species of bees, commonly known as orchid bees, and are characterized by brilliant metallic coloration, primarily green, gold, and blue https://t.co/7OzATvmgLE [source of the gif: https://t.co/FpD3Ed38Z7] pic.twitter.com/p2zZ9bud82

Rare and elusive Amazon animal caught on camera by accident 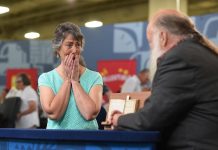 Woman Keeps Hymn Book In Basement. Discovering Its True Value Leaves Her In Tears And Shaking