A teenager was killed and his cousin seriously injured after being shot while playing Pokémon Go in Guatemala.

Jerson Lopez de Leon, 18, died after being ambushed with Daniel Moises Picen, 17, on a street in the town of Chiquimula. Nearly 20 bullet casings were found at the scene of the murder where the pair had been hunting the virtual creatures.

It still isn’t clear why the two were attacked, police said. But they have speculated that it may have been that the attackers found the teenagers using the app itself – which has location features that make it possible to encourage people to go to specific areas, or to locate players.

The two were searching for Pokemon on a street in Chiquimula, 120 miles from Guatemala City. 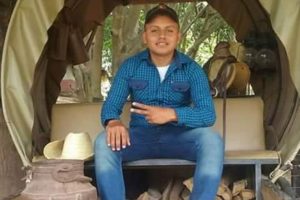 Police found almost 20 bullet casings at the scene of a murder and are now looking for the occupants of a van that was seeing driving from the scene.

Jerson’s mother, Rosalinda, said that the teenager had left the house to go out and play the augmented reality game.

“I don’t know why my son left the house,” she said. “He was already in bed when his cousin sent him a message asking him to go out and download a game a few blocks from the house.”