While scrolling down the Facebook you may come across countless pages and communities. However, there are only a few that made themselves a name on a specific niche. Since the vast majority of people is fond of animals, we started to dig out on Facebook hoping to track down some of the best wildlife conservation communities – a challenge much more harder than we initially thought.

The internet definitely loves animals, but especially pet animals, dogs and cat in particular, or even farm animals. So a wildlife approach looks pretty unlikely and definitely more difficult. But these guys did it!

Majestic Animals is a web community with over 1,7 million followers which constantly offers a great and educative perspective on how people should cope with the wildlife, how to respect it and most important how to help at its conservation.

Created in 2017, the Majestic Animals page is owned by Anbamedia – a media group from Romania, Eastern Europe. In the three years since, Majestic Animals had collaborated with renowned wildlife photographers to offer some great photos and videos of the world’s largest cats. Majestic lions, highly elusive Amur tigers, beautiful leopards or the so fast and fearless cheetah – we all got the chance to experience a very close, intimate encounter with each and every one of these beasts, by sitting in front of a device, and all thanks to the Majestic Animals devoted team.

“We wanted to try a different approach,” explained Tudor, co-founder. “The more we know about these majestic creatures the easier will be to protect them and help at their conservation.We thought…’why to go on a safari to experience a close encounter with a lion, let’s spare the people of the effort.'”

But that’s not all, as the Majestic Animals editorial team spoils its Facebook fans with some exciting animals stories and news about the animals world. The Majestic Animals’ tone – extremely cute but educational, serious in its essence but definitely uplifting – is what has separated them from the ordinary animal communities.

“We tried to find the perfect way to both educate and entertain people,” said Adrian, co-founder. “So we all knew we had to take a different approach in order to succeed.”

However, finding these heartwarming stories isn’t something unchallenging. While some are submitted by conservation groups and shelters Majestic Animals is working with, most of them is the result of Majestic Animals’ editorial team. Even small, this devoted team scours the social media to find new adorable, entertaining, hilarious sources for their articles.

“For some might look like a titanic work, but we all love what we do,” said Marc – member of the team. “It’s so satisfying to see our work is so appreciated by our followers.”

Along the way Majestic Animals had some viral articles and videos. But they found success as a blog last year when stories like the lovely encounter between a baby koala and its its mom, went viral all over the internet.

As about their future plans, Majestic Animals hopes to continue growing as a web community, but their main goal is to provide the world as many information as possible about the way we see the animals world as well as the wise use of natural resources on our planet. 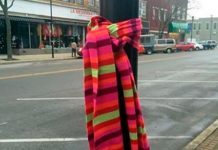 If You See a Scarf Tied Up Around Your City This Holiday Season, Here’s What It Means