Many people like to spend their free afternoons playing and cuddling with their dogs in the backyard. The guy in the video below is one of them, but the way he spends his time is slightly different. That’s because instead of a dog, he plays with a grownup, massive wild bear that could kill him in a matter of seconds
The man cuddles the huge bear as if it was his pet, ignoring the many risks and dangers he willingly subjects himself to.
Sure, bears are often presented as being these cuddly, fuzzy, friendly creatures who feed on honey (I’m talking about cartoons mostly, and not the movie The Revenant), but they are in fact wild animals, which means they have a strong instinct that basically involves killing. Also, they are extremely unpredictable, which again, makes them very dangerous.
That being said, there’s no denying that the connection between them two is something special. The mere fact that the bear allows the man near him says a lot about the level of trust that exists between them two.
These incredible images were apparently taken at an orphaned wildlife center located in Russia.
Have you ever seen anything like this? 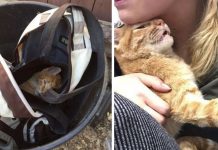