A photograph of a boy sitting dazed and bloodied in the back of an ambulance after surviving a regime airstrike in Aleppo has highlighted the desperation of the Syrian civil war and the struggle for control of the city.

The child has been identified as five-year-old Omran Daqneesh, who was injured late on Wednesday in a military strike on the rebel-held Qaterji neighbourhood. 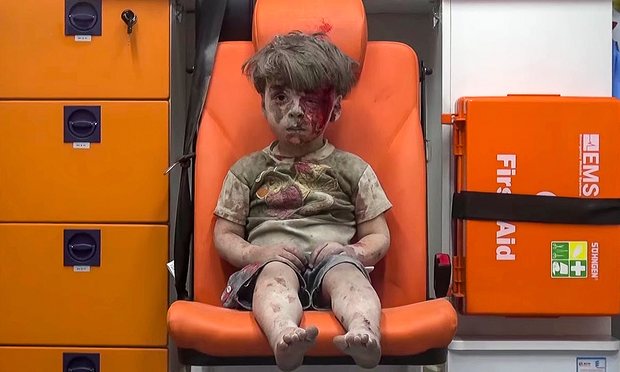 The man on the ground, in a yellow vest, holds him tight as he leaves. The kid wraps his right arm around the man’s shoulder as he’s sped into a holding up emergency vehicle. He thinks back outside as he’s set on an orange seat, alone, by orange cupboards and an orange medical aid unit. The man who carried him in bends down to get a walkie talkie and then leaves. Another man with a camera focuses on the boy. He’s wearing shorts and a t-shirt with a cartoon character. His hands are placed calmly on his thighs. His right eye is wide open, the other eye less so. He looks to the doors of the ambulance, toward the voices. He blinks and looks away.

Devastating pictures and footage from Syria are common now. Bloodied children are pulled out from underneath a sea of rubble. Men and women are hurried from the scene. Ambulances arrive empty and leave full. Bodies pile up. The next day brings the same thing.