As a cop you’d expect to face all sort of challenging situation, yet no one would ever expect anything like this. A deputy from the Douglas County Sheriff’s Office in Georgia found herself in a pretty awkward position after a bold goat broke into her car and eat all her paperwork.

The hilarious scene took place earlier this month with the incident captured on the officer’s bodycam. The officer was visiting a local and since the area seemed clear, she left the car door open. But a few minutes after, she had the surprise of her lifetime when the bold goat sitting right there, in the front seat. However, the officer’s big smile vanished when she realized the intruder eat all her important paperwork.

The funny incident was then shared on the Douglas County Sheriff’s Office Facebook. “To explain what you are about to see, the deputy went to a residence to serve some civil papers,” the post reads. “The deputy explained that due to the number of houses she visits daily, she routinely leaves her vehicle’s door open because she has had to reteat on a number of occasions from vicious dogs. Never once did she expect or even consider what was about to happen this day!

“Eventhough she was knocked to the ground she was not physically harmed in the incident. At the end of the day we all got a little laugh out of it and we hope you do as well!”

Needless to mention, the footage immediately went viral on Internet. Have a look: 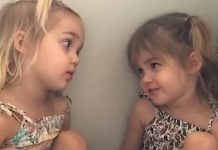 Twin Tells Sister She Wants To Be A Teacher, 2yr Old’s Hilarious Response Has Internet In Stitches